During the nineteenth century there were various government reports regarding workhouses.

In 1777 the Returns of the Overseers of the Poor listed the places where workhouses had been established and how many people each building could accommodate. 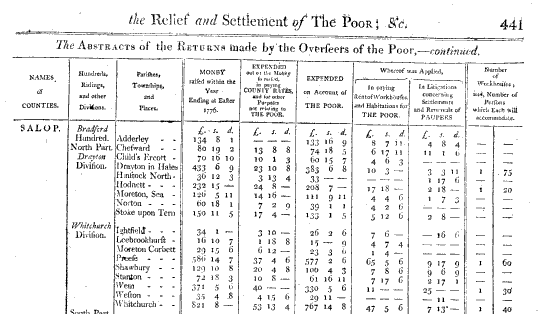 Note that the Whitchurch workhouse had 40 places

This 1861 report listed the names of adult paupers who had lived in the workhouse continuously for more than five years.

It can be seen from the report above that 8 individuals had been in Whitchurch workhouse for more than five continuous years.

A much larger number of people would have spent five or more years in the workhouse but they would have had periods of outside work in-between stays.

Children under the poor law : their education, training and after-care; together with a criticism of the report of the Departmental committee on metropolitan poor law schools (1897). Author: Chance, William, Sir.

1 At Coventry the girls were under the care of a female pauper who was not a scholar, and who had not taught them spelling or reading or anything else. At Shrewsbury there was no schoolmaster or schoolmistress, and no attempt at classification nor any attention paid to the moral training of the children.

2 At Oswestry and Chester both schoolmaster and schoolmistress were paupers.

3 At Southampton the schoolmaster was an aged man whose sense of hearing was almost gone. The boys could not make him hear without raising their voices to a painful pitch, and in consequence paid little attention to him. They were not instructed in work of any kind. The schoolmistress, who had been a pauper, could only read a little and not write at all. By an order of the Guardians of this town the master of the workhouse was authorised “to flog all boys who shall go off the premises without leave, and log them by the leg, and keep them upon bread and water for a week for each offence.”

4 In some of the parishes, on the other hand, the state of things was much better, and in Kingston-upon-Hull, Bristol, and Birmingham, the children were educated in separate schools, while in Whitchurch (Salop) and Canterbury they attended the National Schools.